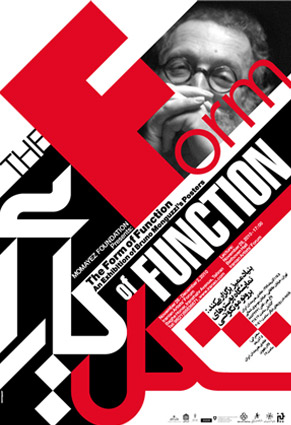 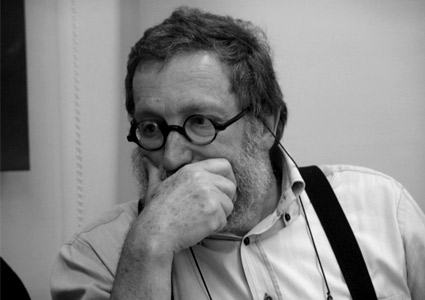 1983.
When I received from FHK Henrion a copy of his book “Top Graphic Design”, I already knew most of the eighteen designers he had selected. Morteza Momayez, whose chapter was preceding mine, was a pleasant surprise: I saw in him the ability to fuse Persian tradition with contemporary design—a truly seminal figure. Because of his great humanity my esteem grew even greater when I finally met him in person, few years later.

2003.
At the Helsinki AGI Congress, on the last evening, Morteza invited me to his table. Afsaneh, his adorable wife, was there with a few young Iranian designers and a couple of guests. After dinner I asked Afsaneh to sing again the old love song she had sang in Echirolles for Anna and me the previous year. Her voice was mild, her eyes were shining, her face so beautiful—no wonder Morteza had used it in his most sensitive poster—and then Morteza too began to sing, and so did Reza Abedini’s wife. Morteza’s great hands pushed away glasses and bottles and helped me to jump on the table. Now everyone at the table was singing. I was circumspectly dancing on the linen table-cloth and everybody in the room slowly began to clap their hands at the gentle persian rhythm. I did not know this was going to be my last evening with Morteza.

2009.
At the AGI Congress in Istambul Anoushiravan Momayez, son of Morteza, asked me to edit and design for the following year a book on my work and an exhibition of my posters to be held in Tehran at the Momayez Gallery, in the Iran House of the Artists. A tribute, sponsored by the Momayez Foundation, to mark the fifth anniversary of Morteza’s death.

When, later on, Anoosh sent all the instructions and a plan of the gallery I was told not to use the small narrow wall facing the entrance.

2010.
Anna and I arrived in Tehran on the evening of Wednesdy the 24th of November.
On Thursday we were expected at the gallery to check the hanging of the posters. When I walked in I had a shock: Morteza was there, in front of the wall I had left empty, smiling at me. Never before a full size blow-up had provoked in my soul such an emotion. An emotion that re-emerged during the following days each time our eyes would cross. The hanging of the fiftyfour posters was perfect, we only had to lay in the two windowcases the few books we had brought. Then Anoush, Anna and I spent a very pleasant evening at the Swiss Ambassador’s residence, shifting continuously from French to English to Italian.
On Friday evening, the five rooms of the gallery were very crowded indeed. A very nice girl whispered in my ear, in French, the gist of each speech. The Swiss ambassador, a very bright and sensitive lady, spoke in English: indeed a well informed and brilliant speech.
I spent the following day teaching at the Vije School for Visual Communication; a round table with a few designers and an art critic ended the afternoon.
On Sunday Anoush, Saed Meshki, Anna and I flew to Yadz. An amazing city, stunning architecture, with an astonishing water system and the very sophisticated and beautiful ventilation towers.
On Monday my lecture at the House of the Artists, again lots of very nice people and lots of questions, even in Italian.
And on Tuesday evening the great, delicious, pleasant goodbye dinner at the Momayez residence, looking down on the distant glittering city lights.
Un très grand merçi to Anoush, to Saed, to the Momayez Foundation, to the Swiss Embassy, to the team at the Momayez Gallery, to our very patient translator.
And to Afsaneh, with a very gentle kiss. 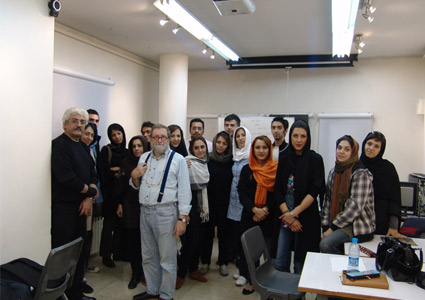 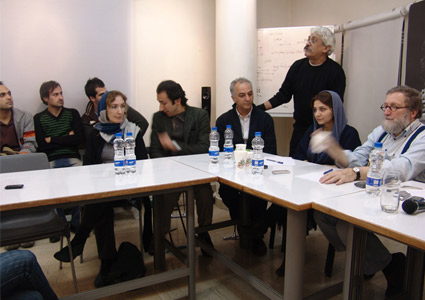 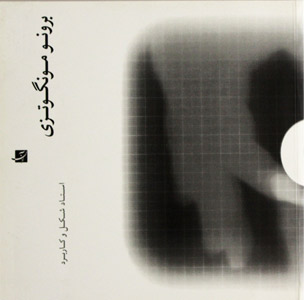